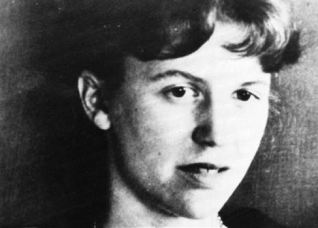 Click the image to navigate to Sylvia Plath Astrology Page, Birth and Death Charts. Poetess Sylvia Plath was born when the Waning Moon was transiting Libra, in the Seventh House, and the Sun Scorpio, in the Eighth House. Her Ascendant fell on the cusp between Aquarius and Pisces. Her Ruling Planets were Saturn in Capricorn, in the Twelfth House, and Jupiter in Virgo, in the Seventh House. Her Libra Moon was un-aspected, meaning disconnected from the other major planetary energies in her Birth Chart. This seems significant considering the manner of her death by suicide at the age of thirty. The Moon however was linked by a perfect conjunction to the Asteroid Goddess Juno and a trine to the Asteroid Goddess Vesta. Her Mercury was in Scorpio in the Ninth House, in a T-Cross with Mars in Leo in the Sixth House (square) and Black Moon Lilith in Taurus in the Third House (opposition). Her Venus was in Virgo in perfect sextile to Pluto in Cancer. Her Chiron was in Taurus in the Third House in a Grand Trine with Saturn in the Twelfth and Venus in the Seventh Houses. Plath committed suicide, after suffering from severe bouts of depression for many years, on February 11 1963.

LIBRA, Moon of justice and harmony
Cooperative and artistic

A note: the garden activities associated with the Moon Sign depend also on the cycle the Moon is in. The Moon transiting through a fertile or productive Sign will no be so favorable if the Phase is not a productive one, and vice-versa. For best results the Sign and Phase of the Moon have to be considered together.

The VIRGO CRESCENT MOON PHASE begins on Sunday, August 4, 6.06 pm,
and ends on Thursday, August 8, 3.30 am, with the SCORPIO FIRST QUARTER MOON PHASE

The Crescent Moon occurs half way through the first week of the Waxing cycle, when the Moon is transiting 45 degrees ahead of the Sun and looks like a beautiful crescent in the western sky after sunset. Psychologically this is an enthusiastic time, in which lots of ideas crowd our mind and we may feel that the sky is the limit. It is a slightly naïve Moon time, but also one full of hopes and dreams (the bright crescent shows now the shadowy sphere of the future Full Moon. The energy of the Moon however needs maturing at this stage and grounding. The first difficulties may appear, the first chinks in the armour; but the challenge is not strong enough yet for us to build up on it.