Mercury and Venus in conjunction to the Sun, spot the difference 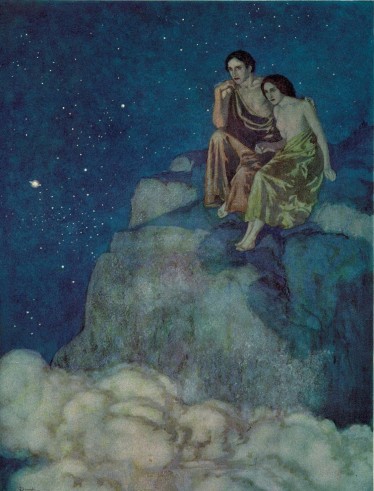 Due to my protracted illness in August (a very bad case of influenza) I missed the opportunity to talk, amongst other things, of the simultaneous conjunctions of Mercury and Venus to the Sun in Leo.

I’m trying to make up for it in this post because these transits are still very relevant.

Mercury became retrograde in the early degrees of Virgo on August 3, and then moved back toward the Sun in Leo. Little Brother met the Sun on August 17, afterwards re-entering the pre-dawn sky as a Morning Star. Only a day earlier, on August 16, Venus also met the Sun in Leo, but hers was a different meeting, and she is now slowly returning to the evening sky, setting after the Sun.

It may be possible to spot Mercury in early September, just before sunrise, in the East, while we’ll have to wait until mid-October to get a better view of Venus as Lady of the evenings. In fact mercury disappears from view only a couple of weeks at the time, while Venus disappears for several weeks.

The difference lays in the fact that Mercury, at Inferior Conjunction, was orbiting between the Earth and the Sun, while Venus, at Superior Conjunction, was passing on the other side of the Sun from Earth’s viewpoint. They appear to do the same thing, from our biased standpoint, but they are in fact doing very different things. Venus was really in opposition to the Sun, from an heliocentric (sun-centered) viewpoint, while Mercury was in fact in ‘regular’ conjunction to the Sun (on the same point of the Ecliptic from Earth)

During those particular phases of their orbits Venus and Mercury remained invisible, ‘combust’ in the Sun’s glow (combustion being the term used by traditional western astrologers to define a planet close enough to the Sun to be absorbed in its light).

A Morning Star planet, visible in the East before sunrise, is said to exert a positive, highly spirited energy, suitable for outward action. Because Mercury’s function is to allow rational thinking, logical connections and communication, these activities will receive a boost from this phase, allowing for more direct and effective communication, greater ease with the spoken and written words, and enhanced logical understanding. Business transactions could benefit from this position.

The Morning phase of either Venus or Mercury, is comparable to a New Moon, fostering initiative and the start of new ventures. As Mercury is concerned, god of merchants, intellectuals, talkers, readers, writers, teachers, students and thieves, we could all try something new during this period.

What Mercury gains in efficiency and logic could perhaps lose in intuitive perception and imagination, qualities better expressed by Mercury Evening Star (next period: end of October to late November 2011).

Venus, on the other hand, is now the Evening Star until June 2012. Her next Inferior Conjunction to the Sun will be in fact on June 6, 2012, while retrograding in Gemini. That conjunction will be a real event, the dark disk of Venus passing visibly upon the disk of the Sun, a sort of Solar Eclipse (phenomenon observable from most localities in Australia). These are rare conjunctions, that come in pair separated by a gap of eight years, the first of the pair having occurred in 2004. Another such pair will occur again only in about 121 years.

Coming back to the present Venus Evening Star, this phase is said to enhance Venus’ more intuitive and self-reflective qualities, helping us to gain greater awareness of the less conscious factors in our relationship. This is a cautious type of Venusian energy, not one likely to risk too much in love, or be blinded by appearances and wishful thinking. New as well as old relationships will be put to the test of this highly discriminating and profound Venus.

The Evening phase of a planet is comparable to a Full Moon, with the subsequent Waning period, a time for realization and illumination, also for sharing our experiences with others and begin a cycle of self-analysis and introspection.

We could emerge from this period with a whole new set of values as far as love and relationships are concerned, more mature, less naive, less plagued by too idealistic expectations of others.

Taking personal responsibility for one’s joy or lack of joy in life can be a gift of the Evening Venus, allowing for more honesty and understanding in relationships, but perhaps for less glamour and superficial romance too.