Steve Job, the man behind the ‘Apple’: Astrology Birth Chart + the Progressions and Transits at the time of death

Steve Jobs was born when the Crescent Moon was transiting Aries in the Seventh House, and the Sun Pisces, in the Sixth House. The Moon only aspects were two sequi-square to Saturn and Pluto, in Scorpio and Leo, the Third and Twelfth Houses respectively. Of some interest to the student of Astrology is the fact that Jobs’ arch rival Bill Gates was born the same year, 1955, and also had the Moon in Aries at birth, same degree, as well as Saturn in the same degree of Scorpio ! Jobs’ Pisces Sun was in a Grand Trine with the South Node in Cancer and Neptune on the last degree of Libra, between the Sixth, Tenth and Second House, areas of work career and wealth. Steve Jobs’ Ascendant (birth 7.15 pm) was Virgo and the Ruling Planet Mercury was in Aquarius, in square to Saturn in Scorpio, from the Fifth to the Third Houses. This square was the only major aspect of his Ruling Planet. His Venus was in Capricorn, on the cusp of the Fifth House, in opposition to Jupiter and Uranus conjunct on the cusp of the Eleventh House. Venus was also in perfect sextile to Saturn in Scorpio, in the Third House, and in far square to Mars. Mars was on the last degree of Leo, in the Eighth House, in opposition to Neptune in the Second House. Venus, Mars, Jupiter-Uranus and Neptune were involved in a wide (not exact) Grand Cross in Cardinal Signs. Jupiter and Uranus in Cancer, on the cusp of the Eleventh House, were in trine to Saturn in Scorpio, in the Third House. Saturn was also in square to Pluto in Leo in the Twelfth House.

I wrote these paragraphs about Steve Jobs’ Astrology on October 15 2011, few days after his death (at 3 pm, on October 5, 2011, in Palo Alto, California), the same day in fact the people at Apple were organizing a memorial to his life and career.

To cast Steve Jobs’ Birth Chart I have used the time of birth given by astro.com and derived from a Sacramento’s birth certificate. Steve Jobs was given away for adoption as an infant and therefore his time of birth from the hospital he was born in must be considered fairly accurate. And in fact the Birth Chart cast for the time of 7.15 pm seems to fit his personality and destiny in a remarkable way.

Here are Steve Jobs’ Birth Chart and the Progressions and Transits Charts at the time of death.
Click the images to view them in full screen.

I want to share here an observation I have made at the time of Steve Jobs’ passing. Around that time I did notice reported in the evening news a cluster of deaths of well known people, all still relatively young, in their fifties and sixties, all victims of the same disease, pancreatic cancer. One was Steve Jobs, others were Ralph Steinman, Canadian immunologist and cellular biologist, who died on September 30 2011 and received a posthumous Nobel Prize for Medicine on October 3; and Ian Carroll, Australian media pioneer who died on August 19 2011, and who, like the others, many considered a genius in his field.

To add to this coincidence I also found out that Rene Magritte, the French surrealist painter, who did inspire Apple famous logo, died of pancreatic cancer too. I was certainly been made aware of this particular illness at that time!

Briefly comparing the respective Birth Charts (time of birth not available for Steinmann and Carroll) I have found out that they all share a powerful Jupiter, as it could be expected, with Jupiter traditionally believed to rule the liver. 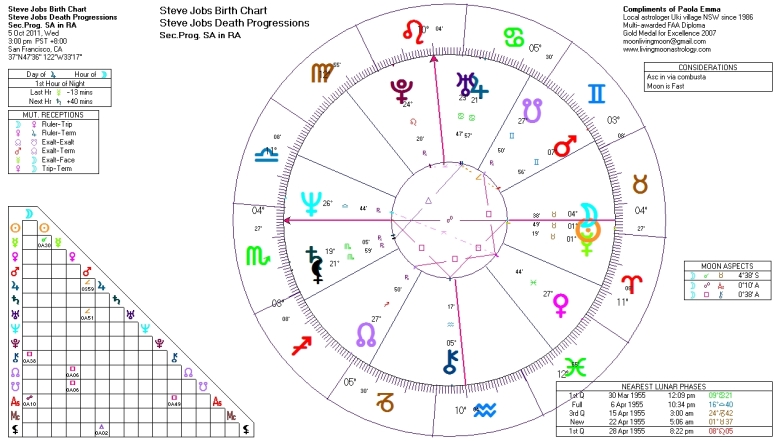 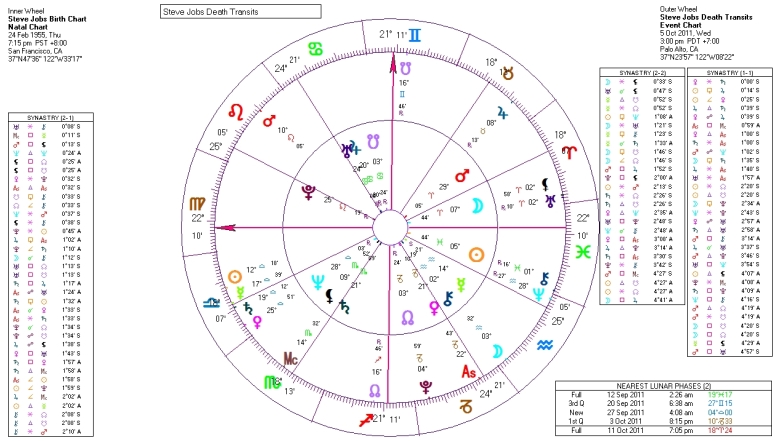 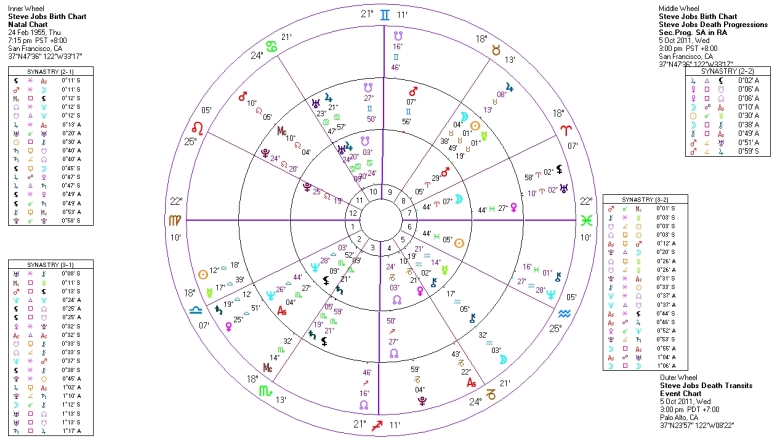