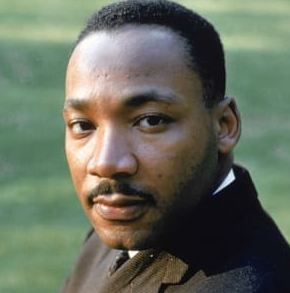 Martin Luther King Jr was born when the Moon was transiting Pisces, in the Eleventh House, and the Sun Capricorn, conjunct the Mid-Heaven, in the Tenth House. His Ascendant was Taurus and so Venus in Pisces, conjunct the Moon in the Eleventh House (contribution to the collective), was his Ruling Planet. The Pisces Moon was in a T-Cross formation with Mars in Gemini and Saturn in Sagittarius (opposite to each other) between the Eleventh, Second and Eighth Houses. His Mercury was in reforming-revolutionary Aquarius in the Tenth House. His Sun was in square to Jupiter in Taurus and the Twelfth House. A Fire/Earth Grand Trine united his Jupiter, Saturn and Neptune, between the Twelfth, Eighth and Fifth Houses. Martin Luther King was assassinated by a white supremacist on April 4 1968 in Memphis, Tennessee. He was shot at 6.01 pm and died at 7.05 pm the same day. Few months later, after the alleged assassin was captured and had confessed to the crime, conspiracy theories began in earnest, attempting to implicate government officials in King’s murder. The alleged killer also withdrew his earlier confession and claimed, until his death, that King was killed by conspirators and not himself. The family of Martin Luther King asked for a trial believing in the man’s account of events. A conspiracy has never been proved however, despite many separate investigation.

Notable when looking at the Progressions and Transits at the time of death, when juxtaposed to the Birth Chart, are the transits of Venus in Pisces (King’s Ruling Planet at birth and in the same Sign/House at the time of death)  happening to be in very close square to both the Natal Saturn in the Eighth House and the Progressed Mars in the Second House. Mars and Saturn were in fact opposite each other and in square to the Moon in Pisces in the Birth Chart, so that the transiting Venus seems to trigger their difficult dynamic in a big way at the time King was assassinated. The reason why the Progressed Mars is still in opposition to Saturn at the time of death, thirty nine years later, is that Mars was Retrograde at birth and became Direct, in Progression, only when King was about eleven years old.

Of interest is also the transiting Mid_Heaven at the time and place of assassination and death (Memphis) moving from twelve to twenty seven degrees of Cancer during the hour between the shooting and King’s death in hospital, crossing the degree of Pluto, God of the underworld, and finally reaching the cusp of the Lower-Heaven (midnight point) in his Birth Chart, this particular cusp being traditionally associated with endings and return to the source. These are indeed amazing synchronicities ! And there are more. Can you find them ? 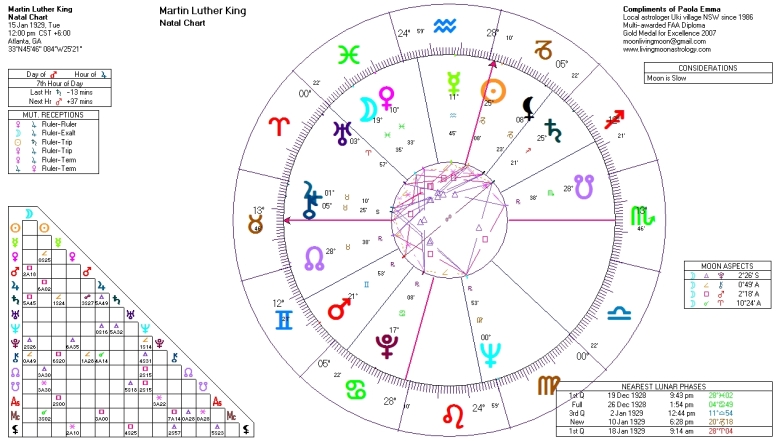 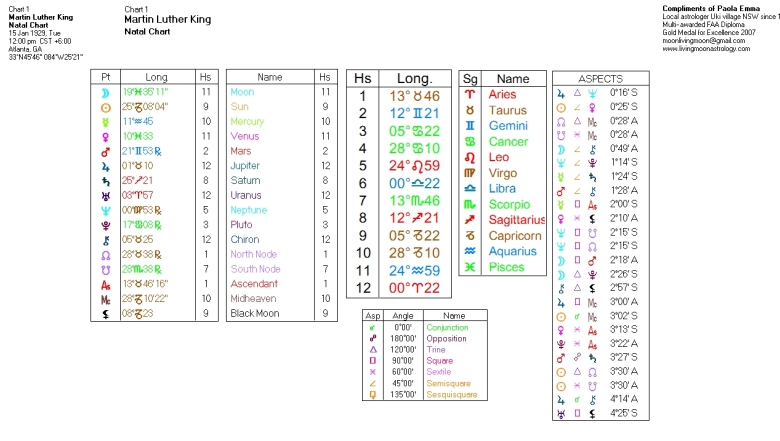 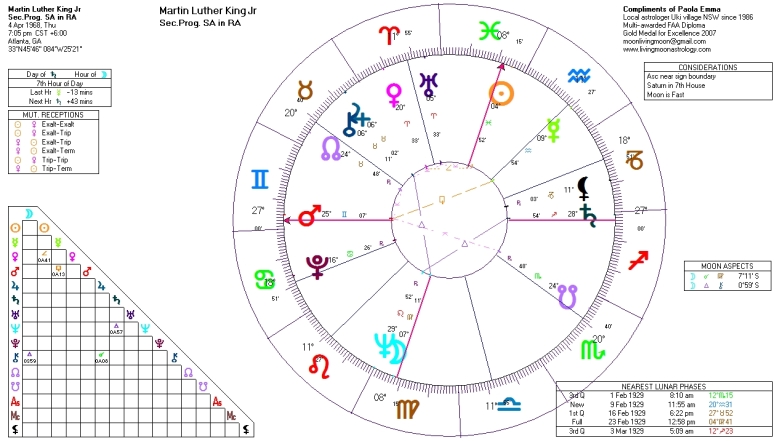 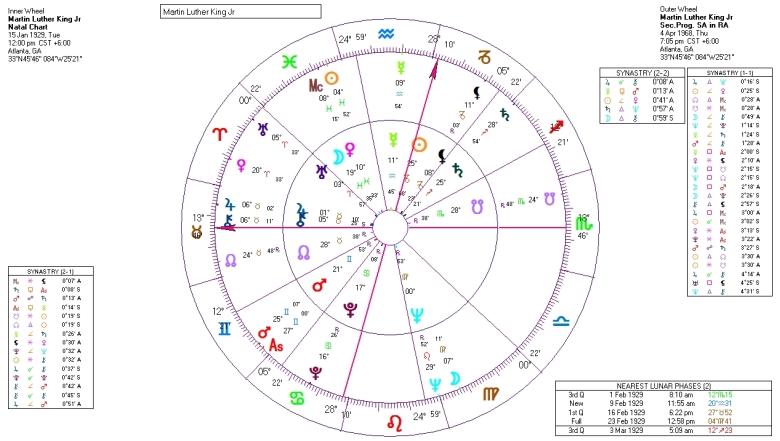 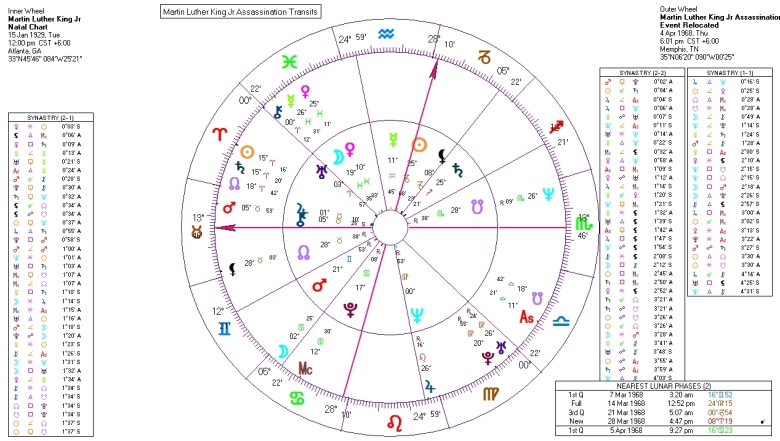 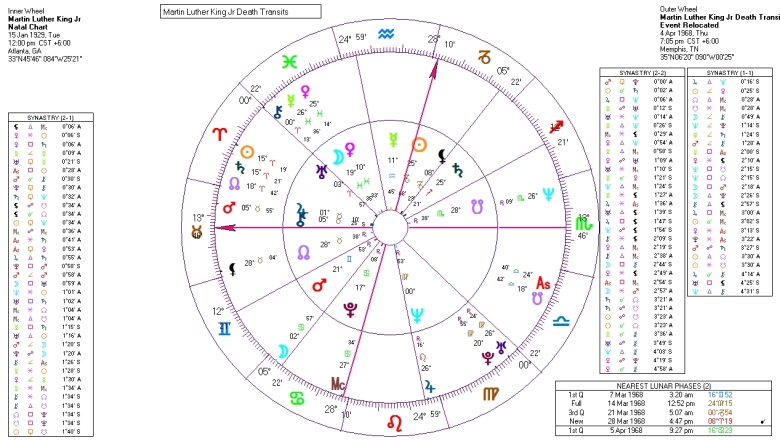 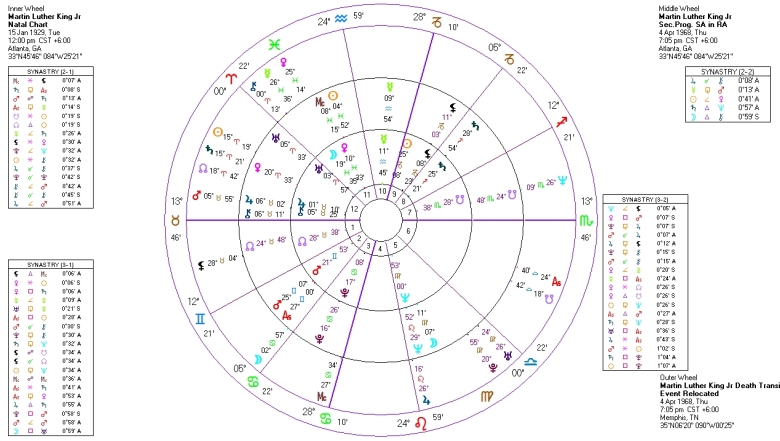