Jupiter in Libra, friend or foe? 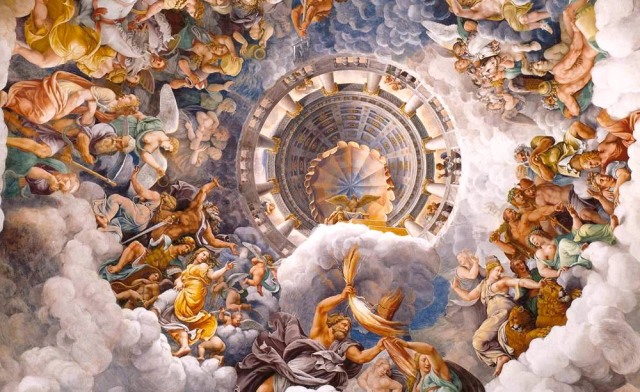 ‘The assembly of the Gods around the throne of Jupiter’ by Giulio Romano. From the vault of the ‘Sala dei Giganti’, in Palazzo Te, Mantova, Italy

Here is a longer version of an article published in the Uki Village News, October/November 2016 issue.

From September 9 this year until October 10 next year Jupiter will be transiting the Cardinal Air Sign of Libra.  This transition resonated with a bang: possibly the largest ever nuclear warhead was tested in North Korea on the very day of the transition; no surprising given that Jupiter never does anything half measure. It is not all gloom and doom though, most students of Astrology, including myself, consider Jupiter in Libra a mainly positive development for the collective.

The recent transit through Virgo (with Jupiter involved, on/off, in a rather difficult and paradoxical configuration involving stingy Saturn and open-handed Neptune) did manifest as a stifling of the generous impulses and optimism traditionally associated with this planet. This coming 12 months Jupiter will instead align to Uranus and Pluto, all now in Cardinal dynamic Signs, more likely to inspire collective changes of a great magnitude.

The fear of changes, reflected by Jupiter in timid Virgo, may be replaced by enthusiasm for trying new ideas and policies, and perhaps the ruthlessness necessary to cut the roots of a noxious past, with those in power hopefully more willing to take up the need of radical reforms.

The periods more likely to see the outer manifestation of these new cosmic alignments will be November to late December 2016, March, and then August to late September 2017. These transits will encourage many to embrace changes, collectively aligning ourselves to principles of justice and equality. In particular people with Air, Fire and Cardinal Signs highlighted in their Birth Horoscopes will be more likely to respond to this cosmic vibes, embracing a more adventurous and risk taking philosophy of life.

At the personal level the big planet could help us find new friends and make new contacts with the greater world.  Finally, Jupiter in Libra is a stalwart patron of the arts. This could be a time of feeling inspired again, in love, art and social ideals. Most importantly, it’s a time of finding our inspirations together.

Jupiter in Libra in recent history

Looking back in history at the time, last century and this, when Jupiter transited Libra (at interval of 12 years) it is easy to see how, even without the accompanying alignment to revolutionary Uranus and trans-formative Pluto active in 2017, this transit tends to manifest as positive changes to the ideological and philosophical mindset of the planet. Civil Rights and Grass Roots Movements, for example, receive a new impetus with open minded Jupiter transiting peace loving, cooperative Libra. Jupiter supports works of reconciliation between warring parties, the signature of important contracts, be they constitutions, trade deals, or something a bit more personal.

If that sounds philosophical, it’s because we’re going to be in a philosophical state of mind during Jupiter in Libra, which will form a positive aspect (sextile) to Saturn in Sagittarius, a Sign traditionally ruled by Jupiter himself.

Many financial astrologers reckon that the cardinal T-square, involving Jupiter to Uranus and Pluto, will manifest as a major economic re-balancing, or “market correction”, with equal winners and losers. Libra is balance, not meaning that balance is always achieved, but rather that balance is the ultimate goal.

Peace accords and trade agreements of great international consequence have been signed during past Jupiter’s transits through Libra, strengthening hopes that the cease fire in Syria, decided on the day Jupiter entered Libra, may hold and eventually bring permanent peace to the region.  Jupiter in Libra, at its best, could de-escalate many conflicts, at the personal and collective level, at least for a time.   Venus, traditionally associated with Libra, will go through a retrograde period starting in the opposite Sign of Aries from early March to mid April 2017, possibly an obstacle or an extended crisis in any peace process.

I list here few historical examples of events associated with the transits of Jupiter in Libra:

Jupiter has been orbiting in alignment with the earth’s Equator for some time now, exerting a greater pull than usual on our planet, fact that could account for the numerous Earth’s tremors and major quake events of the last few weeks.

The ingress itself corresponded to the man-made Earth’s tremor caused by the latest and biggest nuclear test in North Korea (an eerie synchronicity).

For students of Astrology I am listing here the major transits active during the whole Jupiter in Libra period: