Watch out for the magnificent conjunction Venus-Jupiter, March 2012

This is the best rendezvous of Venus and Jupiter in years.  You’ll need clear westerly views. Due to their magnitude the two brightest Planets are already visible when the light of the Sun still lingers. They have been moving toward each others for a while now. The conjunction will be exact on March 15, but the two will remain visually close for the whole month of March. It would be worth your while to look them up every evening for the next week or so. It should be easy to recognize Venus because she is the brightest amongst the two (approx. magnitude -4.18 versus magnitude -1.96).

Astrologically this is considered a fortunate conjunction, Venus and Jupiter being known as the two most fortunate planets, one fostering cooperation, love and artistic creativity (Venus), the other optimism, expansion and improvement at all levels (Jupiter). This is a positive aspect for relationships, travel, business, artistic expression,  fun, financial gain and all sorts of opportunities. In direct line with this transit are Pisces born between the 12 and 16 of March, Taurus born between April 28 and May 2, and all those born with the Sun, Moon, any Planet, Lunar Node, or Angle between the 8th and 12th degrees of Taurus, Pisces, Virgo, Capricorn and Cancer. Scorpio, Leo and Aquarius are also aligned to this transit , but, being connected with it via opposition and squares respectively, they could experience some difficulties in enjoying its full benefits.

I have to apologize for an error in an earlier version of this post (now corrected), if you happen to have read it before this editing, where I stated that Jupiter was Retrograded at this time. He is not, while Mars and Mercury are. A Retro Mercury’s trick?

For more on this transit and others active in March 2012 please check my recent Venus in Taurus post, HERE.

Below is a sky-scape of this event, taken on March 15, around 7.40 pm, looking North-West, low on the horizon (in mid-latitude in the Southern Hemisphere). Note Aldebaran, alpha star of Taurus, and the Pleiades, Seven Sisters, above, and beautiful Capella, alpha star of Auriga, the Charioteer, parallel and north of the conjunction, and finally Hamal, alpha of Aries, the Ram, below the conjunction. Looking up you will also see the great sky Hunter, Orion, and west of it the two main stars of Gemini, Castor and Pollux.

March is in fact a great month for naked eye observation of the planets, with Mars at his brightest after his opposition to the Sun, on March 5, and Saturn visible east of Mars, still close to Spica, the brightest star of Virgo. 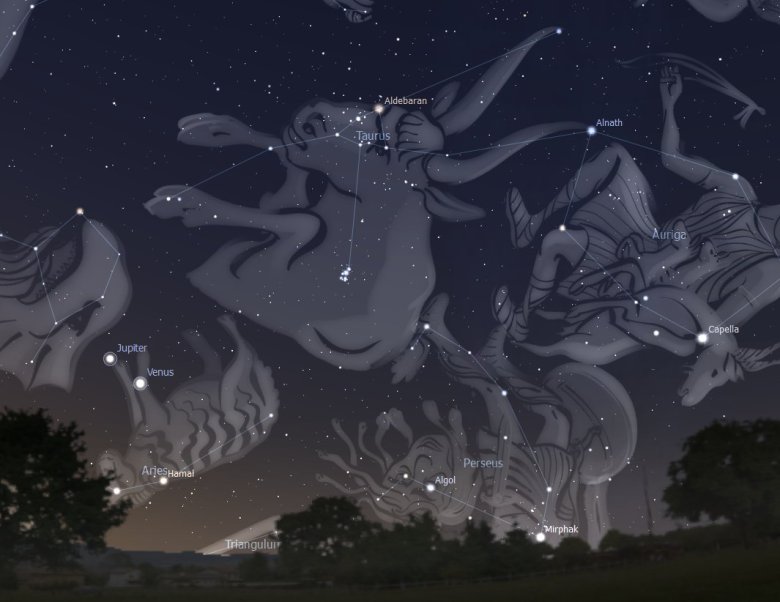 6 Responses to “Watch out for the magnificent conjunction Venus-Jupiter, March 2012”