First of all let’s examine the Chart of the earthquake itself.  The coordinates used were given by the International Seismological Center,  and are those of the epicenter.

Celestial Bodies orbiting parallel to the Earth Equator, with Saturn holding the reins

One thing is immediately apparent, as it was in the Christchurch, NZ, recent quake: many celestial bodies are at the present time orbiting parallel to the Earth’s Equator, including the Sun, Mercury, Mars, Chiron in Pisces (Sign just South of the Equator), and also Jupiter, Uranus and Saturn respectively in Aries and Libra (both Equatorial Signs).

This alignment on the mid-drift of the Earth could by itself increase the possibility of severe seismic and volcanic activity. Another one is the grouping of  many celestial bodies on one side of the sky while only Saturn stands alone on the other side.  Here is an interesting article by Australian astrologer Ed Tamplin on the astrological factors often involved in earthquakes and in particular on the role of Saturn.

The Sabian symbol for the degree occupied by Saturn (16th of Libra) reads: ‘a boat landing washed away(!!!).

To make this symbolic connection even more significant Saturn will transit  this degree between March 5 and 20, two entire weeks, due to retrogradation.

The middle degree of Libra is the starting point of the so called Via Combusta too, a section of the Zodiac, between the middle of Libra and the middle of Scorpio, that is considered unpredictable, unstable, even dangerous in the practice of  Horary Astrology.

Symbolically then Saturn seems to play an important part in this event.

Not surprising to students of Astrology the four Fixed Signs were on the Horizon and Meridian of that time and place, Leo on the Ascendant, Aquarius on the Descendant, while Taurus and Scorpio are found on the Mid-Heaven and Lower-Heaven respectively. Because Leo was on the Ascendant the Sun is ruler of this Chart and is placed in the Eighth House of Death and Loss, together with Mars, Uranus and Mercury. Saturn is instead in the Second House, which in a Mundane Chart like this one represents the wealth of the nation, its financial institutions etc. Already in deep troubles before the event these were dealt a terrible blow by the enormity of this disaster.

It is a well known astrological tenet that Fixed Signs have greater propensity for earthquakes and all kinds of violent disasters, offering stronger resistance to all changes.

I cite here just a few recent examples I have personally observed:

These would be  indeed very strange coincidences if Astrology could not explain them as it does!

The relevant articles on these events can be found via these links: New Zealand’s February Quake ~ Cyclone Yasi in North Queensland ~ Tibetan Earthquake of April 14 2010 ~ Haiti Earthquake of January 12 2010 ~

Studying the Earthquake Chart, apart from many traditional aspects, I have observed a number of Parallel and Counter-Parallels of Declination. These aspects are special because they are not measured in longitudinal distance but rather in declination, North or South of the Ecliptic (Earth’s orbit). Celestial Bodies occupying the same degree of declination North or South are said to be in Parallel, while those on the same degree of declination but in different hemisphere are said to be in Counter-Parallel.

These aspects are important, the Parallel acting in a similar way to conjunctions and the Counter-Parallels to oppositions.

Furthermore Mercury was in Counter-parallel to Uranus (similar to an opposition), another significant connection between these two.

The Ingress of Uranus in Aries

Astrologers are rightly having a field day with the ingress of Uranus in Aries coinciding so closely to this massive earthquake and its aftermath. It is nearly too perfect to be true, especially now that we are all anxiously waiting for news of those damaged nuclear reactors, that actually contain radioactive Uranium which is dangerously heating up (Aries Fire)!

Due to the present nuclear dread in Fukushima and others nuclear plants in Japan, Uranium stocks are falling on the stock market in Australia, country that produces more than 30% of the economically exploitable Uranium in the world. This seems to be in accord with the general planetary trends pointing to another downturn period for the global economy.

In my previous post on the Japanese event I stressed the importance of Mercury as a medium for the Uranian energy, entering Aries only two days before. But there are many other angles from which we can look at this Uranus astrologically, to try to understand why, of all days in a year when huge transits occur, this one day brought about such catastrophe.

To penetrate the mystery we need to look at other aspects Uranus was forming on the day, as well as at the link with other cosmic events, like the two Eclipses that have preceded the earthquake (Lunar on December 21 2010 and Solar on January 4 2011). And also we need to place these transits in the context of Japan’s Birth Charts (1889 and 1952).

On the day of the earthquake and tsunami Uranus, on the 29th degree of Pisces, was still forming a semi-sextile to Neptune on the 29th degree of Aquarius, transit that had been exact in mid-January. Due to the slowness of these two planets the angle was separating  by less than a degree (49 minutes of arc), still very close.  Mercury in early Aries was forming the same aspect (semi-sextile) with Chiron in early Pisces. Considering the nature of this event, sudden and violent (Uranus on the cusp Pisces-Aries) and beginning under the sea (Neptune) the transit fits the bill perfectly, also considering that this was the very last day these two planets would have been in Mutual Reception (one in the Sign of the other and viceversa), relationship that began when Uranus entered Pisces in 2003. At the same time there is another active Mutual Reception between Mars in Pisces (Sign ruled by Jupiter-Neptune) and Jupiter in Aries (Sign ruled by Mars). This relationship Mars-Jupiter, between Water and Fire Signs, is also very appropriate to the nature of the event, expressing itself violently and from a sea location (Mars in Pisces), and with great and expanding power (Jupiter in Aries magnifying the fiery nature of  Mars in the watery realm of Pisces). I feel all this to be remarkable.

Of great interest is also the fact that all the Full Moons since September 2010 have been on the 29th degree of the Signs, so that the degrees of both Uranus and Neptune have been activated by these Lunations, including the Total Eclipse of the Moon of December 21 2010, the day of the Capricorn Solstice. During this lunar eclipse the Sun and Moon were on the 29th degree of Sagittarius and Gemini therefore forming a square with the transiting Uranus and a sextile and trine with the transiting Neptune, aspects that became more exact by the time of the Japanese earthquake. Even the Lunar Nodes, eclipses’ signposts,  that were, at the time of the lunar eclipse, in early Capricorn and Cancer, reached the 28th degree of Sagittarius and Gemini at the time of the earthquake in Japan! We can definitely connect this powerful eclipse with the recent events in Japan. Mars exalted, strong in Capricorn, was separating from a conjunction to Pluto and approaching a square to Saturn in Libra at the time of the eclipse, showing the inherent dangers for the weeks and months ahead, eclipses always having an extended effect in time.

Jupiter was also close to conjunct Uranus for the last time before entering Aries in January, so Jupiter was augmenting the power of Uranus as well. At the time of the Solar Eclipse of January 4 2011 the last conjunction became exact, the solar eclipse making this transit truly powerful and far reaching, as this massive earthquake has demonstrated.

At present Jupiter, obviously another major actor in these events, is also separating from a 90 degrees angle to Pluto in Capricorn, that became exact on February 26, a potentially very destructive and deeply transforming angle, Jupiter enhancing also the power of the Underworld God. 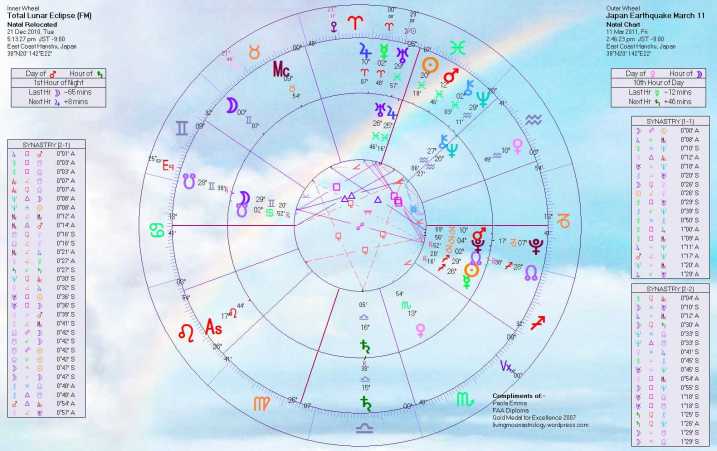 The Earthquake Chart and the Solar Eclipse of January 4 2011

The earthquake’s transits become even more remarkable when we look at them over the backdrop of the two Birth Charts of Japan.

Here I consider some of the connections between these transits and the Imperial Chart of 1889. 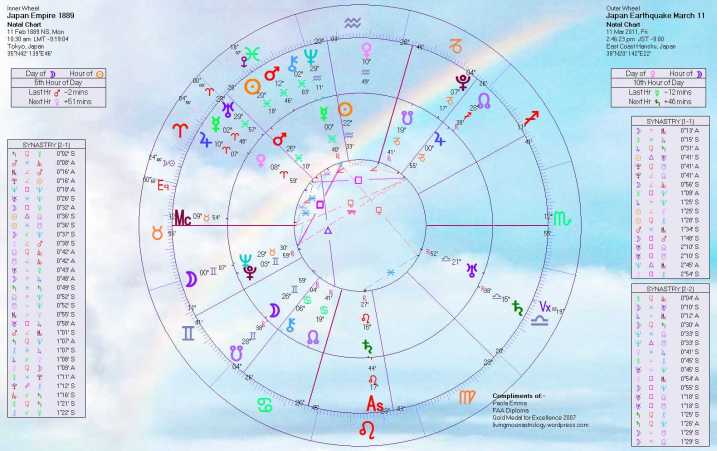 The Moon in Gemini

If the entrance of Uranus in Aries, plus the Sun and three planets in the Eighth House of Death weren’t enough, the transiting Moon, at the time of the quake, had just entered Gemini, a significant placement for Japan, because the Moon happened also to transit Gemini in Japan’s Imperial Chart of 1889 as well as the Modern Japan’s Chart of 1952.

All this seems to show a different face of the airy and light Gemini Moon of astrological lore!

The Moon was also involved in significant transits with some of this event’s major actors, on the day disaster struck. The Moon was in fact in aspect to Mercury, catalyst of the Uranian energy; Saturn, the planet modern astrologers call the Lord of Karma and the ancients recognized as the root-cause of earth tremors, ruling as it does the Earth plane; Chiron, planet of collective suffering and healing; Uranus, planet of sudden and unexpected events; Neptune, God of the Oceans and all that happens therein; and the Lunar Nodes, the axis of destiny, connected with recent eclipses. As I will explain a bit later the Moon’s aspects to Mercury and Saturn seem particularly relevant here, due to the role of these planets in the event when compared to the Birth Charts of Japan.

Naught degree of Gemini is also the middle of the Pleiades Star Cluster in the constellation of Taurus. These stars were considered by some writers to have an evil influence, causing bereavement, mourning, sorrows and tragedies, and also abundant rains and floods, their name meaning ‘The Rainy Stars’. The Star Alcyone, most brilliant amongst the Seven Sisters, was perfectly conjunct the transiting Moon at the time. All the Pleiades were known in antiquity as the Sailor’s Stars.

According to Arab astrologers when the Moon was transiting the Mansion connected with these stars (Al Thurayya, the Many Little Ones) one could plant and sow but do not marry or travel by water.

Please check my next posts for more on the astrological signature of the Japan event. There are in fact many more meaningful aspects to be considered, in particular the connection with the 1952 Birth Chart of Modern Japan.

12 Responses to “Can Astrology make sense of Japan’s earthquake, tsunami and nuclear menace?”