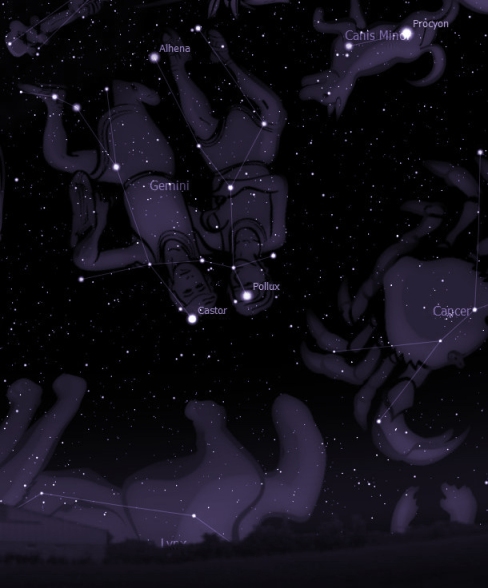 The Stellarium Sky-Scape above was taken around midnight on December 16, 2010, looking toward the North-East

The GEMINIDS METEORS SHOWER will have its annual occurrence between December 6 and 19, with the period of high visibility and frequency around December 13 and 14. This is considered by many the best Meteors’ Shower of the year. It is known to produce 60 to 80 multi-coloured meteors per hour, at its peak. From locations away from artificial light there could be up to 120 meteors per hours!

The radiant point (from where the meteors seem to originate) will be in the Constellation Gemini, becoming visible before midnight toward the North-East. The Moon setting in the West at the same time will allow for a better show throughout the night.

The known source of this shower is a strange object called Phaethon 3200, most probably a comet which became extinct a long time ago. The asteroid, that measures 5.10 km diameter, was discovered in 1983.

Phaethon in Greek Mythology was the son of Helios, the Sun god, himself a demi-god who perished after attempting to get too close to the Sun in the chariot he had stolen from his father (left: a 1636 master rendering of this myth by Paul Rubens – click to enlarge).

The asteroid was named after him because it crosses the orbits of Earth, Venus and Mercury, and gets closer to the Sun than any other numbered asteroid. The Earth passes amongst the debris of this comet every year, around mid December.

The URSIDS METEORS SHOWER will occurs instead between December 17 and 24, with the peak on December 22. This is a less spectacular shower, with about 9, 10 meteors expected per hour, at peak. The shooting stars will appear to emanate from the constellation Ursa Minor, home to Polaris in the north. Because of their location the Ursids are not really visible from our Southern Hemisphere.