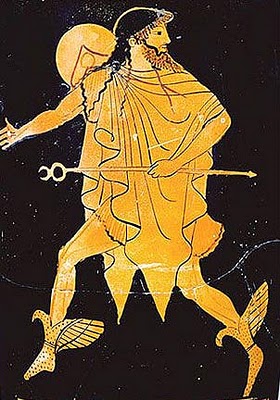 This Tuesday, December 14, 2010, seems the appropriate day to begin talking seriously about the Retrogradation of Mercury, while our small neighbor has just reached the triple conjunction with Mars and Pluto. It is the second time that Mercury becomes conjunct Pluto this month, having already done so, in direct motion, on December 6.

This is the first post in a short series discussing the significance of the phenomenon of retrogradation and, in particular, of Mercury’s retrograde period in the light of the whole Mercury-Sun mutual cycle of 116 days. This present retrograde period will go from December 10 to 30 2010.

Between 3.05 and 3.15 pm (Australian Eastern Summer Time) Mercury will conjunct Pluto and Mars and Mars will also conjunct Pluto. Mercury, already dealing with the underworld of his own Retro period, is now in the presence not only of Pluto himself, the underworld’s supreme ruler, but also of Mars, the Warrior God.

Such a configuration, if found in someone’s Natal Chart, could make him/her a profound thinker, and perhaps also a fanatical thinker and talker, one who is apt to dig for dark secrets and is naturally pulled toward the underbelly of any situation. They could be harsh and judgmental at times, but also mentally very active,  resourceful and shrewd. They may be interested in the occult sciences, or in doctrines or discipline that can help them to gain personal power over others.

At the collective level this could be an explosive combination, Mars, with his sheer force, helping to bring to the surface the hidden contents of the psyche that the underworld symbolizes and over which Pluto presides.  Mercury, go-between Heaven and Earth, will manifest this eruptive and dangerous energy through the Mercurial agent of communication: talking, writing, reading, and all intellectual pursuits.

Today also the Moon is reaching her First Quarter Phase, a challenging time, when obstacles need to be removed in order to power ahead toward the Full Moon climax, in a week time. That Full Moon, let’s not forget, will be also a Total Lunar Eclipse, on a powerful zodiacal cusp, Gemini/Cancer, spanning the Capricorn Solstice, one of the foundation time of the year (shortest day in the Northern hemisphere, longest day in the Southern).

I don’t believe it is a coincidence that this is the very day a second court hearing has been scheduled for Julian Assange, the Wikileaks founder and

spokesperson. His trial has, after all, to do with the revelation of dark secrets the world governments would prefer to keep hidden from public scrutiny. Those secrets have been revealing the lies of planet Earth’s most powerful people, those who decide about war, peace, distribution of wealth, human rights etc.

The Moon was transiting over the area of this conjunction, on top of Mercury, Pluto, Mars and the North Lunar Node the Day Julian Assange was arrested in London (9.30 am, December 7, 2010, GMT). Mercury was on Pluto the day before the arrest too, all facts that make this configuration more significant for him and in tune with the collective events that have followed his arrest and charges. See the ‘revenge attack, appropriately named Pay Back (in true Plutonian fashion) from hundreds of cyber pirates intent at punishing those giant web domains that recently denied support to Wikileaks.

All three cosmic players, Mercury, Pluto and now Mars are transiting in proximity to the Lunar North Node in Capricorn, fact that link them all to the Eclipse season, and therefore to the collective destiny of the planet.  The conjunction with the North Node becomes exact for Mars on December 12, two days before the second court hearing, for Mercury on December 16, two days after, and was exact earlier for Pluto, on November 28, setting the dark tone of the whole proceeding.

It is also a test, at the personal level, of Assange’s own handling of the power Wikileaks has afforded him since he started his exceptional  journalistic scoops  in 2006. Open dissidents, led by Wikileaks’ second in command, Daniel Domscheit-Berg (also known as Daniel Schmitt) who resigned from Wikileaks last Saturday, will be soon launching a rival web site, called Openleaks.org , that will be apparently less obsessed with American foreign policies and more concerned with world-wide issues.

This new whistleblowers’ venture promises to be more democratic and transparent, and also more careful when releasing potentially dangerous information that could harm the whistleblowers themselves. Assange in fact has been accused of having an autocratic attitude and to have unilaterally decided the release of important documents, without proper security encryption in place. This attitude has turned many of the people working for him against him, since July this year. The fact that they are ready to kick the man now that he is down shows, I feel, the depth of the rift between them. So Julian Assange seems to have, at the present time, powerful enemies even amongst his own ranks of cyber freedom fighters.

Due to retrogradation the present conjunction of Mercury to Pluto in Capricorn, will occur one more time on January 18, but by then Mercury will be traveling in direct motion. Hopefully that last pass, with Mercury entering his waxing phase, will bring a resolution to Julain Assange and Wikileaks present nightmare.

I am preparing a proper post on Wikileaks and his founder, with a delineation of Assange’s Birth Horoscope  (birth data provided by the reputable American Astrology magazine, the Mountain Astrologer), considering also the Transits, Secondary Progressions and Solar Arc Directions that have constellated his career in the past and will become active in the foreseeable future.

I need some time though, because I am also still editing a longish article for the Art of Healing, looking at the major transits for the March-June 2011 period. The deadline for that one is already a week old. Using Mercury Retrograde as an excuse never works with magazine editors and publishers, I’m afraid, even if it is often the true cause of the writer block and of the mental meanderings slowing down all forms of rational communication. A longer version of the future transits’ article will be also posted here.